The computer industry that never should have existed

PC’s sales are declining. And I think that is a good thing. PC’s are multi-purpose computing machines that run an OS. We never wanted a PC in the first place. In order to operate the machine you need quite a bit of knowledge. The success of the tablets and primarily thanks to the iPhone and iPad is that we have now operating systems that you don’t need to deal with. You basically only see a bunch if icons. What you do work with is apps and the installation of apps is dead simple. And that is what we want.

A little while ago, I asked myself whether Microsoft would get it right with Windows 8 and I think they are on the right track. The Surface with Windows 8 RT has received quite some criticism and yes, Microsoft still has some way to go, but in essence Windows RT it is getting close to the IOS concept. The benefit of Windows RT is that it has a file system and that it runs Office. For me that is the killer app to transform a tablet from a consumption device into a production device. The disadvantage is that it still Windows and at times you do notice it. But a bigger issue is for me is that Skydrive is not sync-ing files locally and the limited number of apps in the app store. Though for most apps that I would use, there is also be a web substitute. Hopefully Apple will continue to innovate since Microsoft and the rest do need to be shown the way.

Most people, both at home and at work, don’t need a PC. They don’t need to work with an OS but just need to work with apps. Businesses are continuing to make their apps web based. Local computing capacity is only required when you can’t connect to the network. That is still in quite some business and personal areas an issue (and hence my complaint about Skydrive). But with the continuing growth of network capabilities and wireless access points, this will change.

So we move away from PC’s. No more continuously buying new storage capacity. No more buying new PC’s because your PC has become slow just because Microsoft had to apply patches to fix security holes. And much less viruses. Viruses thrive in multi-purpose computing environments. Who wanted a PC anyway? How much time have we wasted upgrading our systems, reinstalling software on our computer and fiddling around with the registry?

Though there will always be a PC market for IT professionals, hobbyists and special purposes, we finally start using dedicated tools that have has primary function the interaction with the environment while data and advanced computing is provided by the cloud, hidden behind easy to use interfaces. 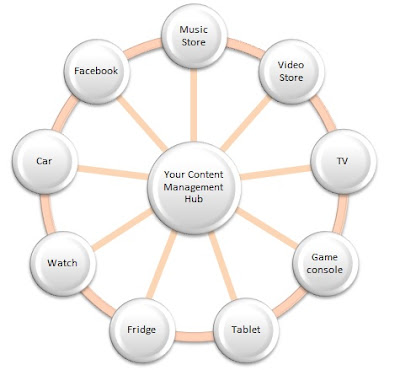 But how will we manage all this? If you buy a video camera from Canon, the camera will probably allow you to upload your video wirelessly to their cloud service where you can edit it and publish clips on YouTube and Facebook. And your Nikkon photo camera allows you to the same on the Nikkon cloud. But do we want all our data be spread across all those different cloud services? No, you probably want it all in one place.

So that is where the big battle will has started. The fight by the big corporations for your life. Yes, you will put everything that there is to know about you in their hands, behind a single password that will be easy to guess. Google and Microsoft have good cards in their hands. Microsoft with Office 365 and Skydrive. Google started already a long time ago, though a lot of people like me don’t like to learn new tools. So I might gravitate towards a Microsoft choice just to stay with Word and Excel. Maybe Apple will be able to change its iTunes/iCloud service into a central hub to manage your content but at the moment it is a rather different concept (though Apple already has a large membership/fan base and they already know how to manage storage).

For a big part, it does not matter to me if I would browse the web or read my email via an Android, iPad or Surface tablet. They all do the same. The brand of the device is irrelevant to me. I can click on an icon to open the email client. The app does not matter to me that much either, as long as it gets my contacts from the cloud. I read my email from an iPad, an iPhone, a Surface tablet, a Windows 7 PC or via a web browser. I don’t care too much about a browser anymore either. I will just use the one that is available on the device. If the website does not render properly, I just go somewhere else. I have seen a variety of Facebook and Twitter apps and they all seem to do roughly the same. So I don’t care about the app but about the use of Facebook as a service.

Though PC’s will disappear, we will get in return an abundance of devices. All connected to the Internet: The Internet of Things. Devices that just work with an intuitive interface and for which you don’t need to read a thick manual.

With all its limitations, the Surface RT is a complete replacement for a desktop PC. I can’t install all software that I have on a desktop PC, but once I can do my video and photo editing via the cloud (I probably already can, I just haven’t bothered to look into it) it can do the lot: browser, email, Word, Excel, file system with cloud service, watching movies, Skype and a variety of other apps including Citrix Receiver. And thanks to the USB port that allows me to connect a large keyboard, it functions as a full replacement of my thin client at work.

The disadvantage of having everything in the cloud is that we will need more bandwidth and storage. We will shoot more videos and photos than ever and this all needs to be stored in the cloud. And we will distribute and share this with others which will result and a multitude of copies. Before the cloud has found real smart ways to avoid duplication of the same thing, we will create a lot of electronic waste. We are going to watch TV on our own time. So no more broadcasting. The same bits need to be streamed to your TV just a few seconds later than to my TV. But I see some smart technologies are already being worked on to reduce the total overhead for both storage and data streaming.

The advantage of all this is that we are becoming much more productive and entertainment will change from fiddling around with computers to consuming (and creating) content.


In the business environment the story won't be much different and we're well on our way. We're tracking goods, machines tell us when they need maintenance, we integrate our systems with suppliers and customers, we put our IT infrastructure in the cloud - either private or public - and apps are becoming web-based and where possible we'll buy them in the cloud. We'll have some exceptions here and there, but no matter where we go, we can do all our work at any location.

Anyhow, the PC industry is diminishing and from my perspective, it should never have been this huge in the first place. But I have this funny feeling about the cloud. I might buy a NAS device after all ...