Somewhere in the 90's when we were building our Intranet, one of my colleagues pushed for the concept of removing folders for the management of documents and to replace this with meta-data. The idea was that folders are one dimensional and have a strict hierarchy, but with meta-data you can create a multi-dimensional structure. 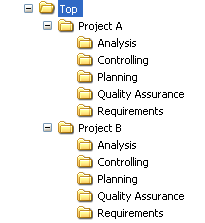 Microsoft implemented this concept in SharePoint in the form of "columns". SharePoint consultants are adamant that folders should not be used anymore (or much less) and should be replaced with meta-data. The concept sounds very appealing but has some limitations (you might want to translate some of them into strengths, but I look at this from the perspective of the lazy end-user):


Though more and more organisations are implementing SharePoint, Microsoft should improve the ease of use in order to improve the uptake. It is disappointing that after more than 10 years, I haven't seen a good easy to use commercially available implementation of the concept.